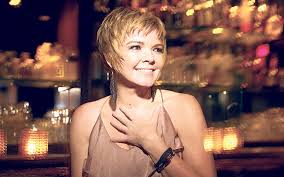 Four-time Grammy nominee Karrin Allyson is acclaimed for scat abilities, perfect intonation, and expressive ballad interpretation. She began her jazz career in 1990 in Kansas City and quickly saw success: by 1992, she was signed to Concord and had released her first album as a leader, "I Didn't Know About You." She continued releasing albums throughout the 1990s, steadily garnering acclaim with each one. 2001's "Ballads: Remembering John Coltrane" was a critical and popular success, earning a nomination for Best Jazz Vocal Album. She was nominated again for this award in 2006 with "Footprints," 2008 with "Imagina: Songs of Brasil," and 2011's "'Round Midnight," her first album on which she accompanied herself on piano for the entire album. She continues to record (her latest release, a Christmas album, came out in 2013) and tour in the US and internationally.