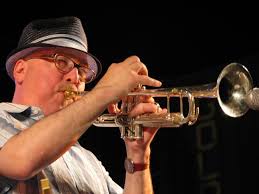 Grammy Award-winner Brian Lynch is one of the most influential and well-respected trumpeters in both Latin and straight-ahead jazz. Brian grew up in Milwaukee and apprenticed with Midwest-based keyboardists Buddy Montgomery and Melvin Rhyne; he went on to earn his degree from the Wisconsin Conservatory of Music. After moving to New York in 1981, he earned his stripes working with jazz giants such as Art Blakey, Horace Silver, Barbarito Torres, and Phil Woods. Lynch recorded many records as a leader—sixteen since he began recording in 1986.

Brian's Grammy was earned for his work with Eddie Palmieri; he won the Best Latin Jazz Album of the Year for his album "The Brian Lynch/Eddie Palmieri Project - Simpatico." Lynch has also conducted workshops in many universities across the nation, in addition to holding faculty positions at New York University and the North Netherlands Conservatory. Brian's own label, Hollistic MusicWorks, puts out Brian's recording projects (including the critically acclaimed Unsung Heroes project, his most recent work), and adds visual and educational elements behind the music to create a holistic music experience for the listener. Through his unceasing energy and impressive talent, Brian is a dominant force in the jazz world today.